Happy Spring friends, after a brief, mild winter we are enjoying the beautiful

Here’s a quick story about….

STARTING THE YEAR OFF RIGHT

As December drew to a close, Murry decided to donate a recently finished large acrylic painting of Caribou, seen from a great distance silhouetted against the dark horizon, to an animal rescue farm in Oregon. His cousin is a principal in a non-profit venture, which cares for horses, other large animals and abandoned pets in an idyllic rural setting. There they provide opportunities for at-risk teenagers, lonely elders and volunteers to care for the animals and at the same time, soothe their souls. Lloyd was delighted with the offer and agreed to pay the shipping costs for the large painting which he planned to place in the upcoming April fund raising auction. Murry took the painting to PakMail for packing, crating and shipment on Thursday. 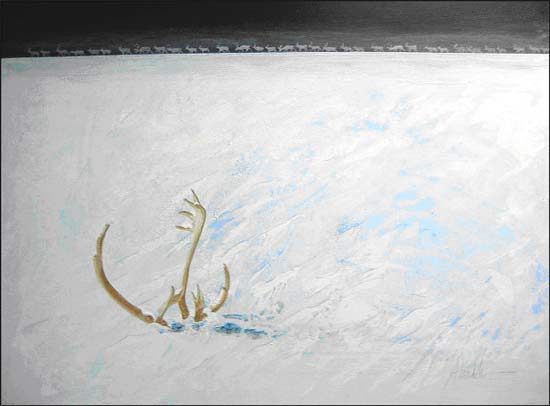 Friday evening we drove to our friends’ home for drinks and dinner. During the evening, Murry casually mentioned the gift of the painting, which both our hosts had seen several times at the studio, and its journey off to Oregon. Tom listened to the story with intense interest, but said nothing. After a delightful meal and many glasses of wine, we returned home and to bed. At exactly 9AM the next morning we were awakened by the jangling phone. Our hostess from the evening before, noticeably excited, was asking where she could contact the auctioneer, or Murry’s cousin, or any other way she could get a hold on the Caribou painting. “You see”, she said, “I was so touched by the way

Tom reacted to the â€˜loss’ of the Caribou painting, I want to buy it as a gift for his birthday in January. I had no idea he loved it so much.”

Murry hurriedly told her to hang up and give him a few minutes, he thought it might be possible to retrieve the painting before it left N.C. Murry called PakMail, which was closed for the long New Year’s holiday. Because he often ships Murry’s works across the country and abroad, Murry keeps the owner’s private home number. He reached PakMail and asked if the painting had left Chapel Hill. “NO, it’s a holiday week-end, why are you bothering me now. It will go out first thing Tuesday morning.”

Murry explained that’s exactly why he was bothering him, he did not want the painting to be shipped at all. There would be a replacement sent in about a month.

Murry retrieved the painting in time, Tom’s wife was joyous at her success and Tom got his surprise birthday gift.

And the Handler Studio made its first sale of 2012.

Chapel community of Chapel Hill. Murry was once again asked to be the Featured Artist by the realtor’s marketing team, and this year asked Enid to come up with ideas for all of the builders’ homes on display. Enid set up an Invitational Show for a selected group of photographers, ceramacists and painters who were showcased along with Murry’s art. We had a substantial turnout for the impressive

reception, which featured wines from around the world chosen by Fearrington

Village sommelier, Maximilian Kass. A really good time was had by all!

A New Series of acrylic painting was started by Murry called Connectivity.

These bright colorful paintings are in a range of sizes and can be custom ordered to fit your space. They are available in a range of prices. Inquiries  welcome. 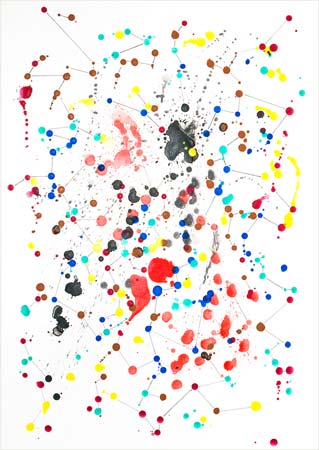 Two of Murry’s signature black and white abstract paintings, Haiku Landscape and Memories of Maine, have been accepted in a competition at So. Shore Art Center; Cohasset, Ma. The show is called “Black, White & Shades of Gray” and was juried by the Assoc. Curator of Contemp. Art, deCordova Sculpture Park & Museum. We’re proud to point out that 2 of Murry’s pieces were chosen out of 1,000 submissions.

A solo show of Murry’s work at Duke Hospital Eye Clinic, primarily black and white prints, will continue through March in Durham.

At Galloway Ridge, Fearrington Village, Pittsboro, Murry will have two acrylic paintings, After the Storm and Large Grasses on view from March 27–June 22.

Upcoming shows: Hope those of you in the triangle will join us.

*May, Artist Studios @ Fearrington, 2nd Art on the Village Green

travel story highlighting rewards of a visit to this quaint riverside N.C. town.

On a closing note, Enid was asked to do a Q&A interview with son Evan Handler for the Chapel Hill Weekly, a new periodical. The short, amusing article appeared in the March 1 issue and received excellent feedback from local TV fansof Sex & The City and Californication. www.chapelhillweekljjjjjy.com

This entry was posted on Tuesday, June 5th, 2012 at 3:09 am and is filed under News and Notes You can follow any responses to this entry through the RSS 2.0 feed. Responses are currently closed, but you can trackback from your own site.